Villa Zaragoza is located at Brgy. Turo, Bocaue, Bulacan in the Philippines. Turo is one of the Barangays in Bocaue; a political division of the area. Bocaue is one of the fastest growing urban municipalities. Furthermore, since it is 27 kilometers away from Manila, it attracts residents who would want some serenity outside the havoc of the city. The area is also 18 kilometers away from Malolos City.

Other key municipalities that border Bocaue include Marilao, Santa Maria, and Obando, all which can be accessed through highway. Another distinguishing element of Bocaue is that the Bocaue River, which is a tributary of Santa Maria River, cuts across it. One of the major economic activities of the area is based on the river, where the residents raise and farm fish. Hence, for fish lovers, they can have fresh delicacies caught right from the fishponds along the Bocaue River.  Lastly, economically, Turo, Bocaue is an industrial center. It is well known for fireworks making.

Now let’s look at key features of the location of Villa Zaragoza:

Anybody looking for a family home would be interested to know whether the area has quality and accessible learning institutions for their children. New Apec Homes developer took into account this aspect of the location of real estate properties. At at least 1 km radius, one can find elementary schools such as Bocaue Elementary School, Binang Elementary School, and Turo Elementary School as well as Sto.Nino Academy. For children who are in college, St. Paul College of Bocaue, is a few meters away from the homes. Bulacan Polytechnic College (Bocaue campus) offers vocational programs.

Villa Zaragoza homes are situated in Turo, Bocaue, which served by a major highway and other small roads ensuring undisrupted accessibility. The proximity of the project from the Manila, allows the residents to access the amenities at the city within a few minutes drive.

Turo has a number of hospitals that are located within and a few kilometers in the municipalities or cities around. Closer to the homes lies health care facilities such as PrioryHospice of St. John of God and St. Paul Hospital. Other hospitals are within 1km radius. They include Mateo Diagnostic Hospital, Bulacan Memorial Medical Group Hospital, and Dr. Yanga General Hospital.

The Villa Zaragoza homes are located at a place surrounded by a number of dining and recreation facilities. One can have a meal out with family and friends at the following restaurants and dining joints FS Restobar, R10 Grill, Tapsi, Gq Resto, and Salakab Resto. Although the restaurants offer a variety of social recreational amenities, for people who love sports, accessing the renowned Philippine Stadium and Arena from the homes is easier.

Shopping can be done at various malls, markets, retail stores, and supermarkets at Turo, Bocaue. Main shopping joints in the area include Bocaue Public Market, Chicken depot, and EiB Chicharon.

While the Philippines is known for having large numbers of its citizens as Muslims, other religions are also represented. There is the St. Martin of Tours Church located in Bocaue; one of the oldest churches in the area. Others include Jehovah Witness, Adventist, Mormons, Baptist, Methodist, Charismatic, Pentecostal, and Evangelical churches. 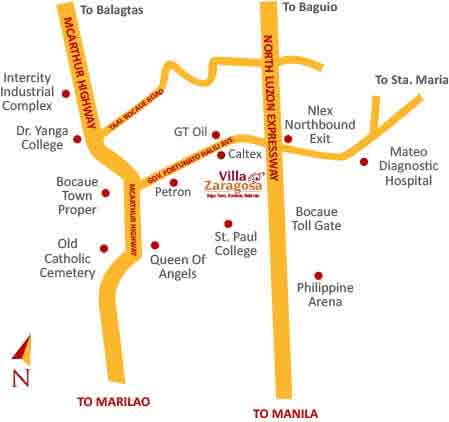